UMD at WMU: The Home Stretch

With three weeks left in the NCHC regular season, teams are actively jockeying for position and the Penrose Cup. North Dakota definitely has the inside track to the Cup and have already locked up home ice for the playoffs. The Bulldogs and Broncos both are currently in line for home ice, but nothing is locked up yet.

Where They Stand Now
Western Michigan is coming off of a somewhat disappointing weekend taking four points at Miami. But the Broncos are looking up losing only one game in their last 11. Their last loss was at the hands of the Bulldogs in Duluth.

The Broncos have endured more than a fair share of injuries this season and have lately looked like a top half team. As usual, seniors Hugh McGing and Dawson DiPietro lead scorers for WMU.

UMD has also improved their standing since these teams last meeting losing one game in their last 12, IF you take out the terrible sweep at the hands of Saint Cloud State.

Home ice for Duluth can happen this weekend if they sweep or SCSU is swept and many matriculations in between.

Currently the Bulldogs are lead in points by Scott Perunovich and goals by Noah Cates who is also second in points.

Prognostications
I haven't been correct often recently and have been reluctant to go full in with the Bulldogs, but I do see UMD coming on strong and sweeping the Broncos this weekend. 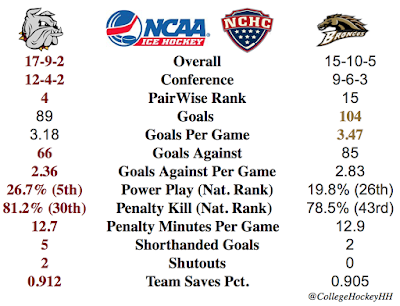