UMD at Denver: We Meet Again

It is a common occurrence in recent years for Denver and Minnesota Duluth to be battling for the NCHC lead and the national lead.

Not so this year.

Battling for second, and more likely for keeping out of fourth, the Pioneers and Bulldogs meet for their second NCHC series. Both teams are trying to keep up with front runner North Dakota while keeping ahead of fourth place Western Michigan. Being swept this weekend for either team will likely mean fourth place and maybe with some distance up to third.

In the national picture, Denver is at fourth in the PairWise Ranking (PWR), by losing only one non-conference game and putting in a strong season in the NCHC. Meanwhile UMD has posted a 5-5-0 record in non-conference play while playing mostly mediocre competition. Now UMD has had a good, but not great, conference record and that does make the road tougher as displayed by UMD having a PWR of 12.

Déjà vu all over again for the Bulldogs. Second straight week UMD is playing a top five PWR team and has to have a good showing to keep their PWR in good shape to even get the chance to play for a three-peat.

Prognostication.
UMD has to be more concerned with PWR implications rather than NCHC Penrose concerns. The Penrose dream for the Bulldogs pretty much flew away after being swept by Saint Cloud then splitting with NCHC leader UND. The Penrose Cup is the all elusive trophy for UMD at this point, but in the end, maybe getting into the NCAA Tournament for a chance to three-peat should be in the front of their collective mind.

If last weekend is any indication, and I think it is, UMD will have to sweep Denver to greatly improve their PWR. A split with then #1 PWR UND left the Bulldogs were they started the weekend at #12.

Unfortunately, I do not think UMD is up to it as Denver is playing very well right now. Looks like another split is in the works. And even with a split, UMD could easily find themselves in fourth for the NCHC and #14 in the PWR. 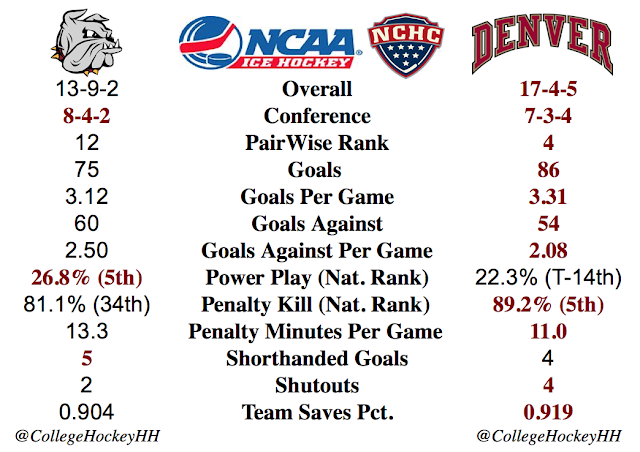