Bulldogs and Mavericks Meet in Playoffs

Only meeting once this season, The Mavs and Bulldogs go at it again this weekend and again it will be in Duluth. UMD swept Omaha in January 7-2 and 3-1.

Since that series meeting, the Bulldogs have had three splits, one sweep, and one time being swept in that order. So, things haven't been all roses for UMD.

Omaha has had the same bad luck as the rest of the season going 2-7-1 since the last time these teams met. Ouch. But that is how it goes for a team tied for last place in the NCHC going 5-17-2. It has been a rough year.

Looking at the stats, it is all on the UMD side, but that doesn't mean that things have not gone well for the Mavs. Their power play is top ten in the nation, four team shutouts, and their teams save percent is close to our criteria of 90% for a contending team.

On the other hand, scoring defense is 58th out of the 60 Division I teams and have come out a winner only nine times this season out of their 34 games.

This should be a good weekend for UMD to get rolling for the playoffs, but no team in the NCHC is ever truly out of any game. 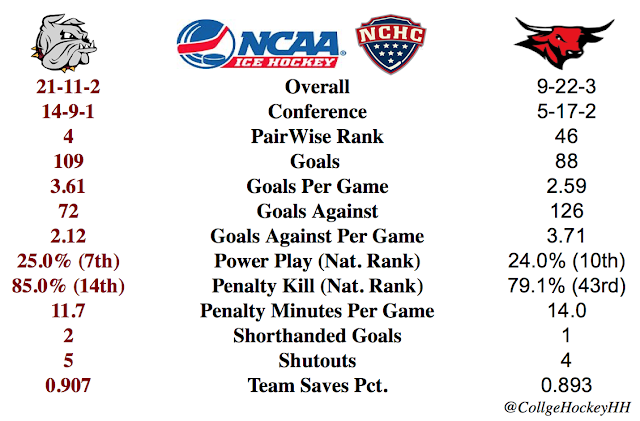