Fighting Hawks Looking to Get On Track Against Bulldogs

It has not been a happy season in Grand Forks. Many have wondered what is happening after missing the NCAA Tournament last year. And they were expecting a good year this year. So far, no good.

UND is scrambling for wins with five of their seven wins being 1-2 goal differential. Three of the five were one goal wins. This is a symptom of not top scoring, but also fair to below average goaltending and defense. Team save percentage is 0.880 which is far from the benchmark of 90% that we look for in our stat comparisons at CollegeHockeyHH.

But this team is never one to take lightly. UND always has talent and replaces talent with talent. It could be a light switch type situation, let's just not flip that switch this weekend.

Prediction. Look for a UMD sweep. they are destined to keep pushing for the Penrose Cup and this is one of may key weekends for that goal. 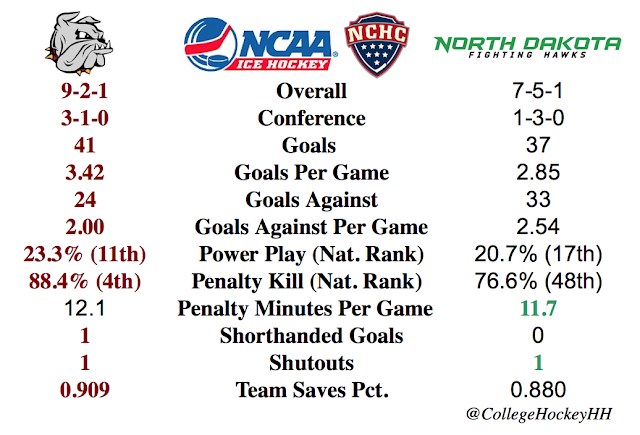 Unconventional, But Here is How We Predict the NCHC

Most conference predictions come before the season starts, but we thought we would try something new and see how the non-conference stacks up and then make some predictions. Here is how the staff at College Hockey HH sees the NCHC regular season going:


Well, there it is. The predicted finish tot he 2018-19 NCHC regular season. If it holds, it would be the first time North Dakota did not secure home ice and CC hosted in the first round. But for now, it is all just speculation.

See you at the Penrose Cup, NCHC!
Posted by Andrew Craig at 10:04 AM 0 comments