In arguably the most important North Start College Hockey Cup tournament ever the Bulldogs finished the mission of winning the tournament.  This in all accounts gives the trophy to UMD to keep for perpetuity.  This will be a nice addition to the trophy case.  More importantly the Bulldogs got two more wins and are now on a five game winning streak.  Now the team enters the final push with four series of conference games for the Julie and Spencer Penrose Memorial Cup.  This trophy is much more meaningful and should be the next milestone the team is eyeing.

Picks
Nebraska Omaha @ #1 Minnesota Duluth:  I am concerned about a let down and the general home funk that the Bulldogs seem to get when going back to Amsoil Arena.  Having said that I will pick the Bulldogs who are the better team to get a sweep.

St. Cloud State @ #13 North Dakota:  The Fighting Hawks continue to be inconsistent after split in Colorado Springs last week.  The Huskies are a very good 7th team in the NCHC.  This will be a split.

Arizona State @ #9 Western Michigan:  The Sun Devils picked up arguably their best win since joining D1 last, season beating Quinnipiac 4-2 last weekend.  This weekend they go to the Harry W. Lawson Ice Arena and will hear the chants from the Lawson Lunatics.  There will be home cooking and the Broncos will sweep. 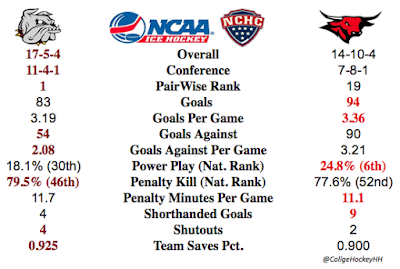 Posted by Andrew Fiskness at 7:33 PM