Haven't We Met Before? Part II

UMD seems to be at home in the Northeast Region, at least in the first round of the NCAA Tournament. After the first round, the Bulldogs have lost to Boston University and Boston College in their previous two Regional finals.

It was one year after their NCAA Championship that the Bulldogs faced the Eagles for the NE finals where BC buzzed right through UMD on their way to their most recent National Championship.

So is this year any different? Yes.

BC is not the highest power in the land of college hockey this year like in 2012. I by no means am saying they are not good or dangerous, but that Johnny Gaudreau led team was a high powered scoring machine.

Additionally, the surging UMD Bulldogs have seen a rebirth through their defense. Not only stellar goaltending by Kazimir Kaskisuo, but the emergence of Neal Pionk into a standout freshman force and the steady Andy Welinski have really stabilized the ship. Not to be overlooked is the force that Willie Raskob has become on the blueline since the postseason started.

With a defense that is solid and scoring when needed, this UMD team can certainly find themselves in the Florida sun at the Frozen Four. 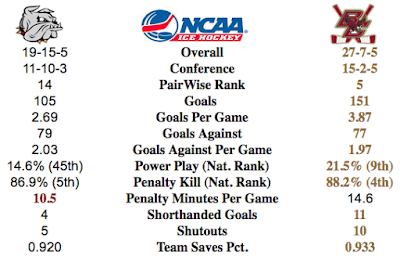