In brief, for it is close to the start, the second season starts tonight.  With the #3 PWR ranking in tow, the Bulldogs head out on the road to Denver to face the #8 PWR team for the first round NCHC playoff best of three series.

Yes, the season has been good for UMD as far as rankings but late season failures to close out NCHC series has the team on a first round road trip.  It turns out, as noted below in the StatPack, Denver and UMD tied for record in conference, but it is the shootout wins, a stat not figured into win percentage, that pushed Denver to fourth and UMD to fifth. 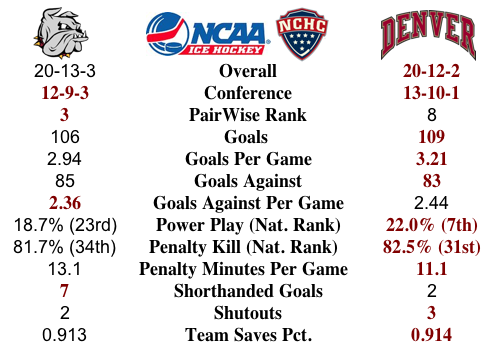 On to the stats:  Compare the stats for now a the end of the season and the teams last meeting Jan 30-31: 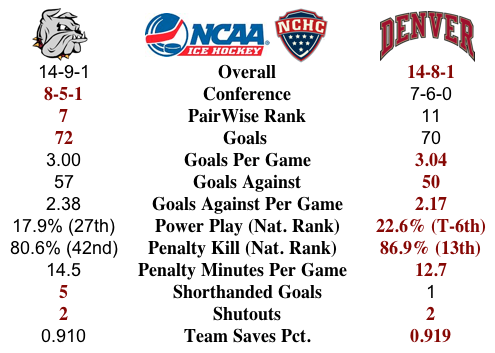 Picks by @afiskness. The regular season has wrapped up and the playoffs are set to begin.  The Bulldogs go to Denver to play for their chance of advancing to Minneapolis.  The Bulldogs road success will be needed for them to get by the Pioneers.  Also, with the end of the regular season the NCHC announced the all conference teams.  For UMD several players made the list. Andy Welinski made the second team, Dominic Toninato made the honorable mentions and Kasimir Kaskisuo the all-rookie team.

Picks
With the conference being so tight I think you could see all sorts of upsets again this year.  I truly think three of the four series are coin flips.
#6 Minnesota Duluth @ #7 Denver:  The Bulldogs have been a better road team this year, their recent play has been up and down.  I expect the Bulldogs to get at least one win, but Denver wins in three games.  The coin says UMD.

Western Michigan @ #5 Miami: The Broncos have been inconsistent of late.  I don't think they will win the series, but their slow down game will get one win.  Redhawks take the series in three games.  The coins says Miami.

Colorado College @ #1 North Dakota:  The pesky Tigers are not good enough and will be swept in Grand Forks.  The coins says North Dakota.