Pioneers Take on Bulldogs in Duluth

UMD looks to Build on Strong Start in 2014

The Bulldogs have climbed their way back up and over the 0.500 mark with the strong showing with last weekend’s sweep at Omaha.  Now they are given the task of taking on Denver.

Looking at comparisons, it may look like this is a good matchup for UMD seeing Omaha already swept the Pioneers at Denver this season.  That was early in the season before Denver got on track.

Denver started the season with a sweep of Merrimack, but then proceeded lose five of their next six games.  That was the stretch when Omaha swept Denver in a pair 3-2 OT games. 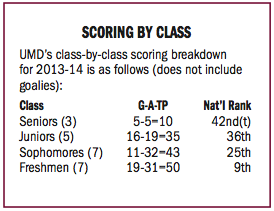 New Scoring.  The freshmen of UMD have been on a tear this season.  The seven freshmen have
totaled 19 goals and 31 assists lead by Alex Iafallo with 6-7-13.  As a group they lead the NCHC for freshman points and are ninth in the nation.

Dueling Goalies.  Sam Brittain is back in form and is playing strong.  Although he has six of the team’s losses on his record, he currently has a 1.96 and a 0.934 saves percentage.

This weekend Brittain’s Pioneers will face arguable the hottest goalie in the NCHC in Aaron Crandall who was in net for both wins last weekend en route to being name NCHC Goalie of the Week.  Crandall is #1 for now and will keep it as long as he plays well.  But McNeely has to be ready for when coach Sandelin deems a change is needed.  It is not a secret that goaltending has been a concern for the Bulldogs this season and the netminder should not be expected to win games night after night.

By the Numbers.  Denver has bounced back well from the afore mentioned early season skid.  DU and UMD stat comparison:
Picks by @afiskness.  I was happy to see UMD come out last weekend and play solid and get a couple of victories.  A lot of the credit goes to the Crandall in the net, but the team played well as a whole.  Hopefully this will continue to this weekend against the Pioneers.  All eight teams are in action this weekend.  There are three NCHC conference games and two non-conference games.

Denver @ Minnesota Duluth:  The Bulldogs played good last week and got the road split but I am not sure they have the mojo yet to sweep a good Pioneers team at home.  Split.

Western Michigan @ St. Cloud State:  The Huskies are the better team playing at home.  The Broncos have some momentum, but I don't think they have enough to get more than a split at St. Cloud.  Split.

Omaha @ Miami:  To teams as cold as ice, so something has got to give.  Miami being the home team should get the nod, so I will say a Redhawks win and tie.

Providence @ Colorado College:  Only one way to pick this: Friars sweep.  The Tigers have to show me something before I will pick them to win a game.