Make hay when the sun shines. It is an old adage that is still used extensively be people in sales. In this case, it is the perfect outlook and mind set for UMD. The Bulldogs host Alaska – Anchorage this weekend in Duluth and then UMD will close out their 2011 home games hosting Minnesota State – Mankato the following weekend. The next home game for UMD after November 19 is January 20, 2012.

The Seawolves started the season on a tear going 3-0-1, but have since gone 0-4-0. The difference is clear, the first four were non-conference and the last four were WCHA conference games. Dig deeper in Anchorage’s record and their story becomes murkier.

UAA played some decent non-conference teams, most notably two WCHA teams. The Seawolves went 2-0-0 against Saint Cloud State and Nebraska – Omaha in their non-conference portion of the early season. Even more intriguing is UAA traveled to UNO for their first WCHA games and were swept in Omaha 4-1 and 3-1.

The first meeting between UAA and UNO was in Alaska so maybe it is a home state thing for Anchorage. But Anchorage hosted Minnesota – Twin Cities in their most recent WCHA action and were decidedly swept 5-0 and 3-1.

The Seawolves’ struggles should give UMD confidence on the weekend, but measured confidence. UMD has seen the lows this season and have fought their way back to being very competitive. It is no time to sit back on recent laurels.

UMD’s Turnaround. UMD has the third longest national unbeaten streak in the nation at six games. It is the longest currently in the WCHA. There is no secret about the improvements. It comes from goaltender play of Kenny Reiter.

Reiter’s impressive weekend at Denver earned him the WCHA Defensive Player of the Week honor beating out the likes of UMTC’s Patterson.

To us at the HighHorse, we saw the vote going to either University of Minnesota net minder, but then you see the stats of Reiter at Denver where he put up five shutout periods after giving up 3 goals in the first period Friday. So that first period wasn’t good, but how he responded on the road for the next five definitely makes him deserving of the honor.

Sleeping Around. As stated prior, UMD has two weekends of home games left before mid January of 2012. In between the Bulldogs will play four series, eight games, away from home. Those opponents are Michigan Tech, Wisconsin, Western Michigan, and Nebraska – Omaha.

These next two weekends are important games for UMD to keep the momentum going before the extended road trips.

By the Stats. This week we are trying a new format and have embedded the StatPack for UAA and UMD here in the preview. 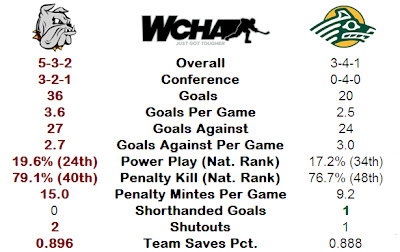 It is refreshing to see UMD finally come around on their stat categories and have the edge against an opponent. UMD has to remember that stats don’t win the games, but they should be well aware as they have been battling back from a subpar start to the season.

Weathering the Storm, SOS? It is embarrassing to be talking PairWise (PWR) this early in the season, but here it goes. The advantage of looking at the ratings this early is to judge the strength of schedule (SOS) of games played so far.

Prediction. The UMD defense has come together and Kenny Reiter is playing at the top of his game. UAA has not showed much after a hot non-conference start. Finding the goal has been difficult and will likely continue to be difficult this weekend at AMSOIL Arena for the Seawolves. This will be a UMD sweep.

Nebraska – Omaha at Bemidji State: After a tough start, the Mavericks have been playing better and finding some scoring. The Beavers have played well at home and should be able to hold off the Mavs enough to earn a split.

Saint Cloud State at Minnesota State – Mankato: SCSU has been playing very good hockey recently, but have struggled early in the season on the road. The Mavericks have had a tough season so far at home and on the road mainly due to injuries. If Austin Lee can play well enough MSUM can get 2 points, but we think SCSU is the better team and will leave Mankato with 3 points.

Minnesota – Twin Cities at Wisconsin: UW is back at home after a tough trip to St. Cloud. The Badgers have played well at home and should be able to continue even against a Gopher team that is really clicking right now. This is the second rivalry series for the Gophers in two weeks and will again bring the fireworks. Bottom line, you should expect to see top efforts from both teams and thus a split.

Colorado College at Denver (Saturday only): In a strange scheduling move, these teams play one game this weekend and play the second of this “series” on December 2. Denver's struggles in net will continue and CC will come home with the win.
Posted by Andrew Craig at 12:24 PM