Waiting patiently for Thursday. That is what college hockey fans are doing. In a scene similar to the movie What About Bob? baby steps to Thursday.

In the meantime, all sorts of outlets are looking for the stories within the story of the game. We at the HighHorse will concentrate on the statistics for now.

The summary of the stats are as follows: 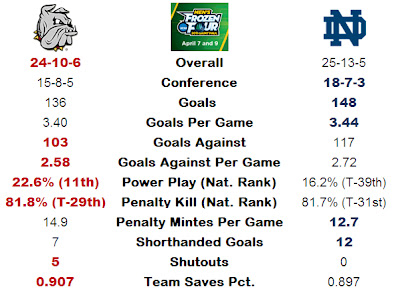 At first look, the Notre Dame and UMD stats make the teams look quite equal. Areas worthy of noting are the defensive stats. Goals against, shutouts and team saves percentage all favor UMD. Yes, the same Bulldog team that we have said over and over again is not built for defense. But in this match-up, the defense seems to go the way of UMD

Conversely, UMD is built for offense. Notre Dame does hold the edge in goals per game.

The last area of note is special teams where UMD holds decisive edge in power play and a narrow lead in penalty kill.

Tomorrow we will look at the intangibles and make our predictions for the Frozen Four.
Posted by Andrew Craig at 2:32 PM