The national Championship is all that is left for the Bulldogs and Wolverines. Tomorrow night one team will take home trophy #1 (UMD) or #10 (Michigan)

Here is how the two teams remaining compare in the stat-pack: 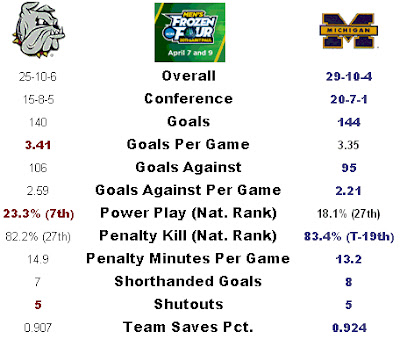 There is not really much to say as this is the championship game. “Throw out the record books…” and all those clichés.

The facts are that Shawn Hunwick is played great for the Wolverines against he Sioux and the Bulldog power play is on fire. The team that makes the game their kind of game wins. In a one game playoff format, that could be either team in a low scoring game or high scoring game.

For UMD to win, they have to start clicking five on five and keep on the torrid power play game.  the team defense also needs to continue to be strong.

Conversely, for Michigan to win, they need to stop UMD from scoring in bunches. If Michigan can slow down the Bulldogs like they did the Sioux, they may just have the championship.
Posted by Andrew Craig at 8:42 PM