The stat break down for tonight’s UMD – Yale game, the Bulldog match: 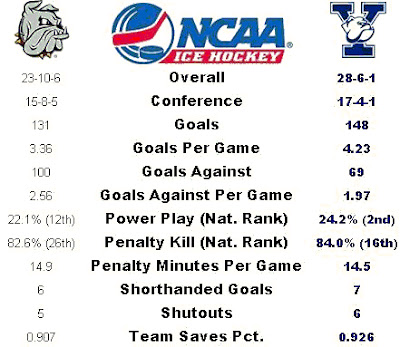 Looks like the same lopsided stats from yesterday against Union. Yale, like UMD, played better in the beginning of the season and has dropped off a little towards the end. This game is for larger stakes, a trip to the Frozen Four, so both teams should be on their top games. If the teams play like yesterday, that would be a UMD advantage.

In the end we give the game to UMD and a triumphant return to Minnesota before the Saint Paul Frozen Four.
Posted by Andrew Craig at 11:52 AM