#3 Bulldogs Set to Play in Houghton

UMD Moves Up in PWR By Calculation Change

First off, the NCAA has changed their formula for their ranking system that is mimicked by the PWR. As a result, UMD has moved past Denver into the #3 spot in the version at USCHO, the version taht we use at the HighHorse.

Stories detailing the changes can be found at USCHO who details the chronology of the PWR and College Hockey News (CHN) that details the "TUC-cliff.".

UMD travels to Michigan Tech this weekend for the wrap-up of their four games this season. There really isn’t much to say leading into the games except we need to see consistency out of the Bulldogs.

The stats are very lop-sided in favor of UMD as shown in the MTU graphic from their press release for the series: 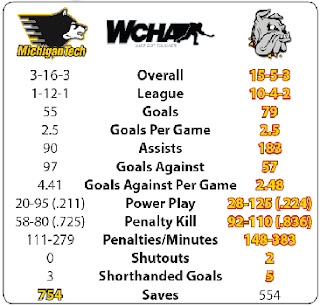 MTU is having a terrible year and that is due to their rash of injuries as noted in the Mining Gazette.

Prediction. UMD seems to always have trouble with the Huskies. If UMD doesn’t sweep, chances for the MacNaughton Cup are likely dead and. Also with every point lost, a beneficial top two finish, and a likely bye in the first round of the new format Final Five, is slipping away. Worst of all, we won’t really know what to expect from the team except for erratic play.

With all the factors taken into account and the opponent, we predict a Bulldog sweep.

Around the WCHA. With the changes in the PWR noted above, the TUC criterion has been altered. Therefore 11 of the 12 WCHA teams are now listed in the PWR. The HighHorse will continue to use USCHO PWR rankings for the rest of the season, but we will limit listing them to the top 20.

#13 UNO at #2 North Dakota: When these teams met in Omaha they played two close, exciting games ending in a split. This is Dean Blais’ return to Grand Forks and he likely will not feel the love he used to when he was bench boss for the Sioux. The Mavs will likely know the importance of the games to their coach and to their post-season aspirations. The Sioux will not sweep, but it will not be a split either.

Alaska – Anchorage at #4 Denver: UAA showed some life last weekend sweeping CC in Alaska, their first home sweep in four years. Unfortunately the Seawolves will not fare as well traveling to Colorado. This series is a Pioneers sweep.

Minnesota State – Mankato at #10 Wisconsin: Mankato is surging, but not seeing the wins that their effort may deserve. Or maybe they are getting the results they should as they let two leads slip in the third period in a tie with Denver last Friday, then they blew a 3-0 lead to lose 4-3 in OT the next night. The Mavs will see some payoff this weekend as they Split against the Badgers.

Saint Cloud State at Bemidji State: SCSU is still trying to find their legs after the rug keeps getting pulled out from under them with poor play and player dismissals. If the Beavers could pretend the Huskies are Omaha this would be a BSU sweep. Alas, this series will end in a split.

Alabama – Huntsville at #20 Colorado College: CC will try to get back on their winning ways without Jaden Schwartz. A series against Huntsville should help them with that. CC sweep this weekend.
Posted by Andrew Craig at 12:31 PM